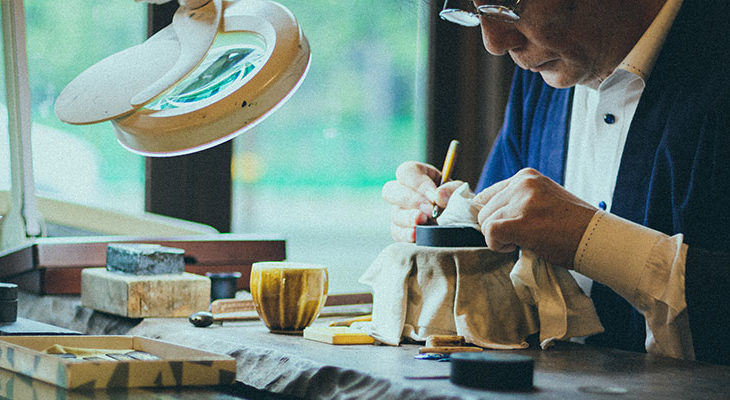 Higo-zogan started inlay designs being used to decorate gun barrels and sword guards 400 years ago in the early Edo Period.”Higo-zogan Mitsusuke”, produces items that add a new appeal to the fashion of the samurai.

We interviewed the company representative,Mr.Yuji Osumi.

Developed Higo-zogan as a fashion item for warriors.

Kumamoto castle town, Shinmachi. Higo-Zogan Mitsusuke is located along the streetcar line. The sound of tools clacking from the back of the store.Higo-Zogan is made by a technique called “cloth inlay” in which gold and silver are hammered into a black iron base with fine incisions.

― What is an attractive point of Higo-Zogan?

It is characterized by the combination of deep black and gold on iron.The Hosokawa family, the feudal lords, liked Higo-Zogan sword guard and it spread as a fashion among samurai in Kumamoto. The inlay is applied to the part of the sword guard that is visible from the outside when the sword is inserted, and represents the dandyism of the samurai.The black color of the iron ground is used to balance out the color of the shining gold.

Mitsusuke is said to have been moved to Kumamoto in the Edo period by the Hosokawa family.At first, they worked as a forger and inlaid flue pipes.In the Meiji era, the company took on the trade name “MITSUSUKE” and began to specialize in inlaying.Most of the famous people who make guard on sword have gone out of business, but since our family originally made smoking pipes and other products, we have continued to make products that are in line with the times, and we are still here today.

― There are many collaborated products.

About 50 years ago, I was asked by PLATINUM PEN CO., LTD. to collaborate with “Playboy(magazine)” on a fountain pen, which was my first collaborated product.The fountain pen was chosen as a gift for the 2016 Ise-Shima Summit. Mitsusuke  made plates in Japanese hotels and medals which were sent to sports festivals and so on, and He created the medal that would be presented at the  Women’s Handball World Championship in 2019.

― Which products are popular these days?

The younger people bought earrings.  The earrings sparkle and stand out. I started selling colored lacquer products about 15 years ago, and they sell well by online shopping. They don’t want usual products, they want something different.

A trick of fortune?He went from being a company employee to an inlay maker.

Mr.Yuji Osumi was an employee of a company in Tokyo. The decision to take over the family business came from an unexpected source.

― Are you interested in inlay when you were child?

Just I heard sounds of tools cracking when I was a child,I never thought I’d get to do that job.After graduating university in Tokyo, I worked in Tokyo. But 1 years later, I got a 10-month fracture by skiing, so I was hospitalized in Kumamoto. And I was retired.

― You were badly hurt… A trick of fortune?

If I didn’t get hurt, I probably wouldn’t have come back to Kumamoto.
I decided to take over the family business because I had to work something. At the time,there were more than 10 craftsmen and it was very lively.

― How did you feel when you started working as an inlay maker?

I had a hard time figuring it out until I tried it at work. When I started working, I was asked by a friend to make a keychain. I made it for him, but the engraved letters on the keychain were distorted. He said “It’s distorted!” However, he took good care of it.
That was the first thing I ever made for someone.

― What are the important processes that affect the finish of inlaying?

Secondly, striking.However all progress is important.

※There are some other processes.

― You use a deer antler when you are hammered in gold, don’t you?

This one has just the right amount of elasticity. Too hard is bad.

A deer antler has been used since the Edo period.

― How long do you use tools?

These are my father’s tools. We use hummers for 20 to 30 years.
Each craftsman’s tools are made in a way that is comfortable for him to hold.

He is the president of the Higo-Zogan Promotion Association.
What  does he think about Higo-Zogan’s future?

― What are the challenges?

The number of successors to the artisans who make the crafts is decreasing.The reason is just that products don’t sell well. I heard some professionals say we can’t make a living just by tradition. we have to create products that fit the current times.

We are still making guards on a sword and smoking pipes as in the past, but there is no demand for them.Our challenge is to create products that can be used widely. So, we have been using new materials and making collaborated products. We make our living by making products that fit the times, and at the same time, by taking custom orders.

― How about the response from people overseas?

The experience of Inlaying KUMAMON was popular with people from Taiwan and Hong Kong. Chinese who live in Japan have live streaming. I have to think about how to sell to people overseas. In the Toledo region of Spain, inlay work is very popular, and the name “damascene” is well known abroad. The phoenix pattern is based on the damascene. I’m thinking of making reprints of floral patterns and old designs that are popular in other countries.

― How do you think about Higo-Zogan’s future?

It has been 200 years since I was a blacksmith in the Edo period. My son does other jobs so I don’t know what will happen in the future. There are 5 craftsmen including me, they are over 60 years old. I wonder how many more years I can do this.

It’s hard to carry on a tradition, so many of the artifacts disappeared. However, there are some craftsmen who are in their 40s and 50s in the Higo-Zogan Promotion Association. I have to teach them techniques and think about new products, how to sell them.

― What is the tradition for you?

It is difficult to protect the tradition and  to  pass it down  from master to younger generation.I can’t make a living only protecting tradition, that means not enough selling products.It’s our fault that we can’t sell, so we have to create products that fit the current times.Otherwise, I think it will be difficult for traditions to be passed on.

Some traditional handcrafts have disappeared. I have been involved in traditional crafts,so this is unbearable for me, so I have to do something to preserve them.
I continue to try various things to pass on to the younger generation and seek to contribute to inlay in any way I can to pave the way.

combination of black and gold. I had the image of tradition as stubbornly protecting old techniques, but I was impressed by how Mitsusuke was quick to adopt new things and continue to actively challenge new things, such as collaborations.I think Mitsusuke has been around for so long because he is always bringing in new ideas. Immediately, the staff purchased the earring.