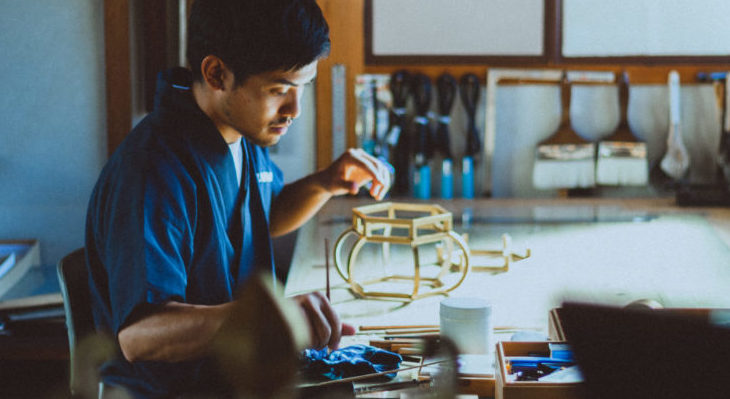 Delicate handicrafts created from Japanese paper and glue
“I want to create products that match the times and pass them on to the next generation.”

Crafts made with only japanese traditional paper and glue

Yamaga City located in the northern part of Kumamoto Prefecture once was a place of unique culture when it served as a lodging town and as a base for trade and distribution centered around the Kikuchi River.Mr. Nakamura’s workshop, “Yamaga Lantern Nakamura Seisakujo,” is located in a corner of the town.

―How did the Yamaga Lantern Festival begin?

The origin of the Yamaga Lantern Festival is described by a legend which says that the villagers of Yamaga lit up their torches to welcome the procession of the Emperor Keiko whose path was hindered by a deep fog hanging above the Kikuchi river. The torches which the villagers of Yamaga continued to offer to the Omiya shrine in which the Emperor Keiko is enshrined evolved into Yamaga lanterns in the Muromachi period and led to the appearance of “Yamaga Lantern Festival” which has remained to the present times.

―What kind of crafts are Yamaga lanterns?

Yamaga lanterns, also called Yamaga-toro, are created using only washi paper and glue to create a three-dimensional shape. In addition to golden lanterns, there are pieces crafted to look like famous buildings and shrines. There is no overlap in pieces of paper when pasting together Yamaga lanterns, and the structures, no matter how small, are hollow. Paper lanterns shaped like various buildings are presented as offerings to the local shrine.

※There are many other tasks involved, and the order of production may change depending on the work.

Becoming the youngest lantern craftsman in his 20s.

The craftsmen who make Yamaga lanterns are called “Toro-shi,” and Mr. Nakamura is the youngest of the eight lantern craftsmen (as of 2021).

―What inspired you to become a lantern craftsman?

It all started when I was a junior high school student, then I went to a workshop where Yamaga lanterns were made as part of my work experience. It was interesting to see what Yamaga lanterns are like and how they are made, and I wanted to do it myself.

―How did you feel when you actually started making lanterns?

In the beginning, I was too busy doing the work I was given. It was tedious work to make the parts, so it was only fun at first. After eight years of training, I was certified as a lantern craftsman just before my 28th birthday.

―I heard that votive lanterns are an important job for a lantern craftsman.

Only when we become a lantern craftsman can make votive lanterns. It takes more than half a year to make these lanterns, which are commissioned by the town of Yamaga and other organizations. It’s a very responsible job because the wishes of the people of the town are put into it.

Mr. Nakamura has also created innovative works based on anime and manga motifs.

―What do you find attractive about Yamaga lanterns?

The freedom to create my own work. It’s interesting to work on the paper to give shape to what I want to express. As long as you follow the rules of the Yamaga Lanterns , I can make anything I want. I’ve made manga and anime motifs, airplanes, and so on.

―Do you draw your own blueprints?

For traditional items, the shape is fixed, but if I am basing it on an animation, I make it from scratch myself. I have a sense of the overall size, and then I think about the detailed parts. I like the process of figuring out how to assemble it.

He is also working on the development of new products that make use of the techniques of Yamaga lantern making.

―products such as mobiles and aroma diffusers have been created.

The reason why we decided to develop new products is simply that Yamaga lantern craftsmen are not making any money. Selling souvenirs and artwork is not enough to generate a stable income. We were not able to create products that could be distributed to general consumers, so we worked on developing new products.

―Misato Tomita, his wife, is the owner of Yamanote, a store located on the first floor of the workshop. They promote the charms of Yamaga.

We don’t have any great desire to preserve the culture of Yamaga or to make the region more exciting. I just feel that I have to work hard at my job as a lantern craftsman, and so does my wife.

I feel like I’m part of the big flow of tradition, I think it is the result of the efforts of the people who came before us over a long period of time, and it is something that has survived to this day. I believe that by continuing to work hard to create products that fit the current times, we will be able to pass them on to the next generation, and they will finally be able to call it tradition again.

Yamaga lanterns have been a part of Yamaga’s culture for centuries,but they have survived because of the devotion and faith of the local people,it’s not something that we have to have in our life, so I think it could die out at any time.
It has been passed down from generation to generation for hundreds of years, so I’m not sure if it’s inevitable that it will disappear in the future.
In order to prevent that from happening, I have to do my best trial and error in my age group and somehow leave it to the next generation. Rather than doing something for the future, I think it is important to do what I have to do now.

※The above information is current as of October 2021.

The gold lanterns look like metal, but they are made of Japanese paper, so they are very light! I was amazed at the high level of technology of the Yamaga lanterns. After the interview, all the staff enjoyed shopping at “Yamanote” on the first floor. Mr. Nakamura’s works are also on display in the store.